HECTOR HERRERA was born and raised in Mexico. From elementary school through high school he received a full bilingual education. At an early age he discovered his interest for narration and voice-over. Focused on theater arts he began attending acting classes both in Mexico City and Los Angeles, CA. 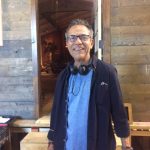 – Hector’s voice has been used extensively throughout his career for TV and Radio commercial campaigns. Casting Directors & Producers like his work for the quality and consistency in his delivery of neutral accent Spanish which communicates naturally to the USA & Latin America advertising & media markets.

Foundations of Spanish Voice Over ::  By Hector Herrera